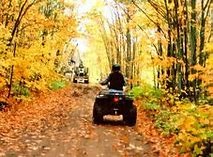 John Raymond Swab, III, of Campbell, Ohio, formerly of Brookfield, Ohio, died unexpectedly on Tuesday, June 30, 2020, while at home. He was 40.

A 1998 graduate from Brookfield High School, who received a certification as an automobile mechanic from the Gordon D. James Career Center. Most of his life, he had worked as a truck driver for various companies throughout the valley. In addition, he was an excavator and a mechanic.

In his spare time, he enjoyed slinging mud and turning a wrench. John loved to ride 4-wheelers and go off-roading. He had a unique ability to fix and rebuild almost anything on wheels.

He was preceded in death by his father; by his maternal grandfather, Albert Good; and by his paternal grandparents, John & Hilda Swab, Sr.

Arrangements are private and expressions of sympathy may be left for his family at www.bricelandfuneralservice.com

Memorial contributions can be made payable to the funeral home to help defray the funeral costs.

To send flowers to the family or plant a tree in memory of John R. Swab, III, please visit our floral store.